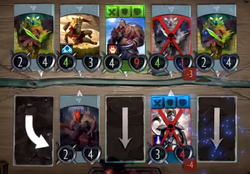 Pathing, or unit combat targeting, decides where an unblocked unit will attack during the combat phase.

Any new unblocked unit that is played during the Action Phase will have a Pathing Card placed automatically to decide it's attack direction.