How to Play Guide for Artifact: The Dota Card Game

This page serves as a basic how to play guide for Artifact.

Artifact has two players face off against each other using a pre-constructed main and item deck. The board consists of 3 lanes, each having a tower, mana pool and board area for each player. The goal of Artifact is to destroy the two enemy towers, or the enemy tower and the enemy ancient.

Each player must bring two decks, randomly shuffled, to a game of Artifact. The Main Deck consists of most of your cards, such as Heroes, Spells and Creeps. Your Item Deck consists of 9 Items, which are randomly offered for purchase later in the game. Each player starts with 5 cards in your hand at the start of the game, drawing two each new turn.

Artifact has two primary resources available to the player throughout the course of the game. Mana which periodically replenishes each turn and is required to cast cards, and Gold which is used to purchase items from your Item Deck at the end of each round.

Artifact cards, with the exception of Items, are divided into four colors. You may only cast a card of a certain color if you control a hero in that lane with that color.

A game of Artifact is divided into Turns, Lanes and Phases (in that order). Each Turn is played over three Lanes - consisting of multiple Phases. A round comprises the entirety of one course of play - ending when the final lane has finished being played. Rounds start with each player's mana increasing, replenishing in each lane and heroes and creeps being deployed to the board - and end with each player being able to purchase Items with their hard-earned Gold. Each Lane has its own individual pool of Mana, which is used to cast spells. A typical turn in a Lane consists of both players casting spells and summoning creatures - ending when both players elect to not play any more cards. Phases separate the Lanes into distinct points of play, such as the Action Phase where you play cards and the Combat Phase where cards smash into and battle each other.

To be precise, each turn consists of play across three lanes, followed by Shopping and Deployment.

Players are timed with a chess style turn timer. Both players start with a pool of time that is expended across the entire match while they are able to act. Players have at most one minute to complete an action, before the turn automatically passes. Both timers gain an additional 2 minutes upon the end of the third lane. If you run out of time, you lose.

During the Action Phase, each player takes turns playing cards onto the current lane, moving to the combat phase once both players elect to pass the turn without performing an action. At the beginning of a action phase, your Mana is refreshed to its current maximum.

When a player elects to end their turn without playing any cards (Out of their own volition or having no mana/cards), they are considered to have passed the turn. If their opponent has not passed previously, they may play cards as normal and the phase continues as usual, with both sides being able to continue play.

During the Combat Phase - all heroes, creatures and improvements that can attack, do so. Once all damage has been resolved, the Action Phase begins in the next lane. If all three lanes have been passed on, the game advances to the shopping phase.

During the Shopping Phase, each player can spend gold to buy item cards at the Shop. The Shop offers, in this order, a random "Secret Shop" item, an item from your Item Deck, and a consumable item. Once both players elect to finish (or "pass") shopping, the phase ends.

During the Deployment Phase, each player has two creeps each randomly assigned to a lane. Then, both players secretly assign any hero ready for deployment to any lane. Heroes are ready for deployment if they are dead and their respawn time has elapsed, or they have not yet to be deployed and the correct turn for them to enter has occurred.

Once all of the other phases have finished, the turn ends. Both player's maximum mana pools increase by one for all of their towers, and they draw two cards. The Action Phase begins in the first lane.

Radiant always starts the game, and each subsequent lane is started by the person who passed first before the round ending (Initiative). 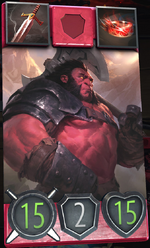 Heroes are the powerhouse card in Artifact. They bring the biggest impact to game as they are typically the strongest units in play, allow you to cast other cards and various abilities and equipment available to them.

Heroes don't require to spend any resource to deploy onto the board - and are not played from your hand. Instead, your order the heroes in your deck prior to beginning a match of Artifact. The first three heroes are each assigned, randomly, to a lane at the start of the game. Your fourth hero is deployed at the beginning of the second round, and fifth at the beginning of the third to any lane.

A hero card is required in a lane to cast spells. You may only cast spells in a lane if you control a hero of the same color. For example, you must have a

Red hero like Axe in the lane you're trying to cast Duel.

When a hero card is slain, it returns to the Fountain for two rounds - after which it is immediately put up for redeployment.

Hero cards are the only cards in Artifact able to wield powerful Items. Heroes have three slots at the top of the card for the three different types of equippable items - Weapon, Armor and Accessory.

Additionally, all heroes have a set of three Signature Cards which are automatically added to your deck whenever you have that hero in your deck. Essentially, heroes make up a total of 20 cards in your deck.

Spell cards provided instant, powerful effects sometimes even spanning all three lanes. They require Mana to cast, and are expended once used. As mentioned before, you require a hero of that spell's color in the current lane to play the spell.

Creeps, more traditionally known as Creatures in other games, are every other unit on the board that is not a hero. Creeps have a noticeable sub-variant, Melee Creeps - which are the reinforcing creeps that are randomly deployed at the start of each turn.

Creeps are either played from card through paying mana and the associated card, or summoned through items such as Book of the Dead or Horn of the Alpha. When playing creep cards from your hand, they have the same restrictions as spells as you must have a hero of the creep's color in the current lane to play it.

Creeps are similar to heroes in that they have the three primary attributes - Attack, Armor and Health. However, they cannot equip items. (But they can be targeted by valid consumable items such as Healing Salve!).

Improvements provide a permanent upgrade to a lane, and are played from the hand. They require mana to cast, and have the same hero/color restrictions as previous card types. Improvements typically provide periodic actions or buffs at the start or end of a lane, such as Conflagration.

Items are purchased with

Gold, and are never drawn from your deck. Item cards are purchased during the Shopping Phase at the end of a turn. They have no mana nor color requirement to be played from your hand once purchased. More on this later. 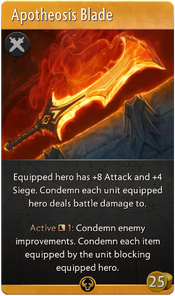 One of the most powerful items, the Apotheosis Blade

Items are divided into both 4 different categories that determine their time, and 3 different slots in the Item Shop.

, and killing an enemy creep awards 1

. Gold is then spent either on items, or activating some abilities of cards.

The Item Shop is available during the Shopping Phase following each turn. Here, you can exchange your gold for items. The shop has 3 different slots,

Consumable item cards are, as the name suggested, consumed when used. Essentially a mana and color free version of spells, these cheap items typically affect a unit in some way, such as healing it or sending it back to the Fountain.

The other 3 categories are, as we have mentioned before,

As equipment items get more expensive, they both get stronger not only in the benefits they provide, but often offering powerful active abilities and effects that can swing games in a player's favor.