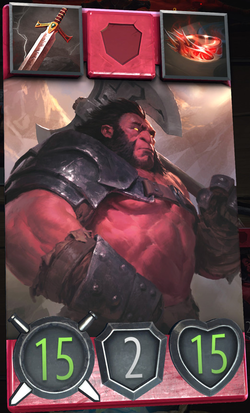 There are a wide variety of Heroes featured in Artifact. These Heroes each boast their own ability, and have their own specific play styles.

Heroes are a player's strongest card in the game, because of this players are limited to 5 per deck. Currently 48 heroes (12 for each color) make up the 280+ cards that have been released with the base game. In Artifact, every hero is categorized into one of four following colors:

The hero card's color dictates what spells you can play with that hero.

A hero card has three separate slots for Items at the top of the card: Weapon, Armor and Accessory. A hero can have one item in each of these slots, each conferring unique benefits, up to a total of three items overall. Most heroes have innate abilities, as indicated by an icon on the bottom left corner of the card art. Finally, the primary stats of the hero are located on the bottom row, corresponding to their

Most heroes, with the exception of Axe, Mazzie, Keefe the Bold, and Magnus, have an ability indicated by the icon on the bottom left corner of the card art. These come in four different types.

You must have exactly five Heroes in an Artifact deck. You can only play non-item cards in a lane if you control a hero in that lane with the corresponding color. Heroes deploy into the game in the order that they were placed into your deck. The first three randomly appear split between the three lanes. The fourth is deployed during your first Deployment Phase (mana turn 4), and the fifth during the second Deployment Phase (mana turn 5).

If a hero dies, it is sent to the Fountain for the rest of that round and then the following round, before it returns during the next deployment phase.

A database query error has occurred. Did you forget to run your application's database schema updater after upgrading?

All heroes have been revealed!